The Federal Judicial Center (“FJC”) recently published a report surveying 952 federal district court judges to identify the scope of jurors’ improper use of social media during trial and how the courts are addressing the problem. The FJC’s report, Jurors’ Use of Media During Trials and Deliberations, reflects that despite various prevention efforts, jurors continue to use Facebook, Twitter, Google and other sites in several, and that the courts continue to struggle to detect such usage. According to the survey results, 30 judges identified incidents of improper juror social media usage,

Such misconduct can easily result in a mistrial or even reversal of judgement. In State v. Smith, Sept. 10, 2013, the Tennessee Supreme court vacated a first degree murder conviction on the sole grounds that one of the jurors communicated with a prosecution witness during trial via Facebook. The court lamented that Internet and social media “has exponentially increased the risk….of extra-judicial communications between jurors and third parties.” This decision is but one example of this common occurrence of juror misconduct through social media use, requiring attorneys and jury consultants to engage in on-going passive monitoring of publicly available social media information.

In fact we recently did our own search of the Twittersphere with X1 Social Discovery, and uncovered several hundred improper Juror tweets in a single day (1/13/2016). Here is a small sampling: 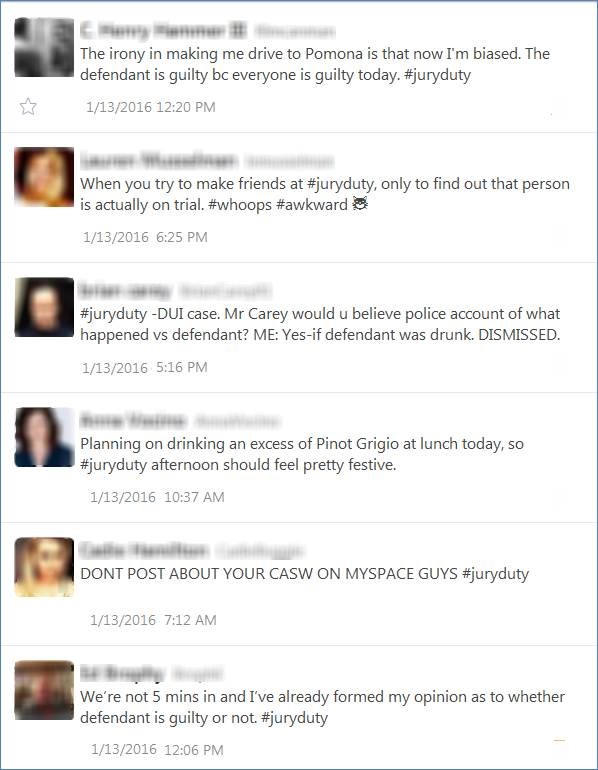 It is thus no surprise lawyers are increasingly using Twitter to investigate and monitor potential and impaneled jurors. However, this type of monitoring activity can lead to serious attorney ethics violations if direct or even indirect communications are sent to the juror as a result of such monitoring activities. (See e.g. New York County Law Association Formal Opinion No. 743, May 18, 2011). Proxies hired by attorneys, including eDiscovery service providers, investigators and jury consultants are subject to these restrictions, which can also apply to social media communications with witnesses or opposing parties who are represented by counsel.

For this reason, X1 Social Discovery features a specialized “public follow” feature that enables access to all the past Tweets of a specified user (up to 3200 past tweets) and any new Tweets in real-time without generating a formal “follow” request with the resulting problematic communication.. These legal ethics rules concerning indirect social media communications underscores the importance of employing best practices technology to search and collect social media evidence for investigative and eDiscovery purposes.

Collecting evidence in a manner that prevents, or at minimum, does not require that attorneys and their proxies directly or indirectly communicate with the subjects from whom they are collecting social media evidence is a core requirement for solutions that truly address investigative and eDiscovery requirements for social media. In addition to preserving and authenticating social media evidence in a proper manner, X1 Social Discovery provides fast and comprehensive searching of the data in a manner unmatched by any other technology.

It can even potentially prevent a possible mistrial through early detection of a juror’s improper Tweets or Facebook postings.

UPDATED:  Attorney Ignatius Grande, co-chair of the New York State Bar Committee on Social Media, contacted me in response to this post, to point to the Committee’s recently published Social Media Jury Instruction Report. The report describes the scope and challenges from juror social media use during voir dire and trial, as well as proposed amendments to standard jury instructions address such juror misconduct.